With the spread of the internet, the number of users who express their opinion about different entities on social networks has grown. A very popular social network for expressing opinion is Twitter, where users write short tweets of a maximum of 280 characters. The research about emotions on social media has focused mainly on English messages, even those performed by Brazilian researchers. Emotions analysis on Portuguese messages used machine learning procedures as se Naive Bayes, Support Vector Machine, Decision Trees, Random Forest and Logistic Regression. Many of these studies used a polarized approach that classifies the emotions on negative, positive, and neutral.

In Brazil football (soccer) is a nation passion that arouses extreme feelings in fans, who express their emotions in many forms, moments and channels, including on Twitter. The work of identifying emotions is influenced not only by the language, but also by the culture of the country and the entity which is being monitored.

Therefore, the objective of this work is to detect emotions towards a Brazilian soccer team, called Palmeiras, using the social network Twitter. As it is a Brazilian football team, the language used in the study is Brazilian Portuguese.

To attribute each tweet to a particular emotion, a taxonomy of existing emotions is needed. A well-known taxonomy is Sykora et al (2013), which includes the emotions anger, confusion, disgust, fear, happiness, sadness, shame, and surprise. However, it is possible to choose a taxonomy of its own for football fans' emotions.

For this, the first step is to capture the tweets. It is done via API through the Palmeiras entity code. After gathering the sample of tweets as the test corpus for the project, these tweets are studied in detail. At this point, simple rules are set for how a human being thinks to classify these phrases into different emotions.

The next step is to implement this logic in NLP++, make a feed into HPCC Systems and call the NLP++ analyzer via NLP++ plug-in on the live tweets.

Finally, a visualization of the outputs is shown using a visualization package. An interesting idea would be to create a dashboard with the percentage of each emotion in each moment of the game. Therefore, the user would be able to know, during the game, whether Palmeiras is more likely to win or lose, or if something comical happens, for example.

In this Video Recording, Pedro provides a tour and explanation of his poster content. 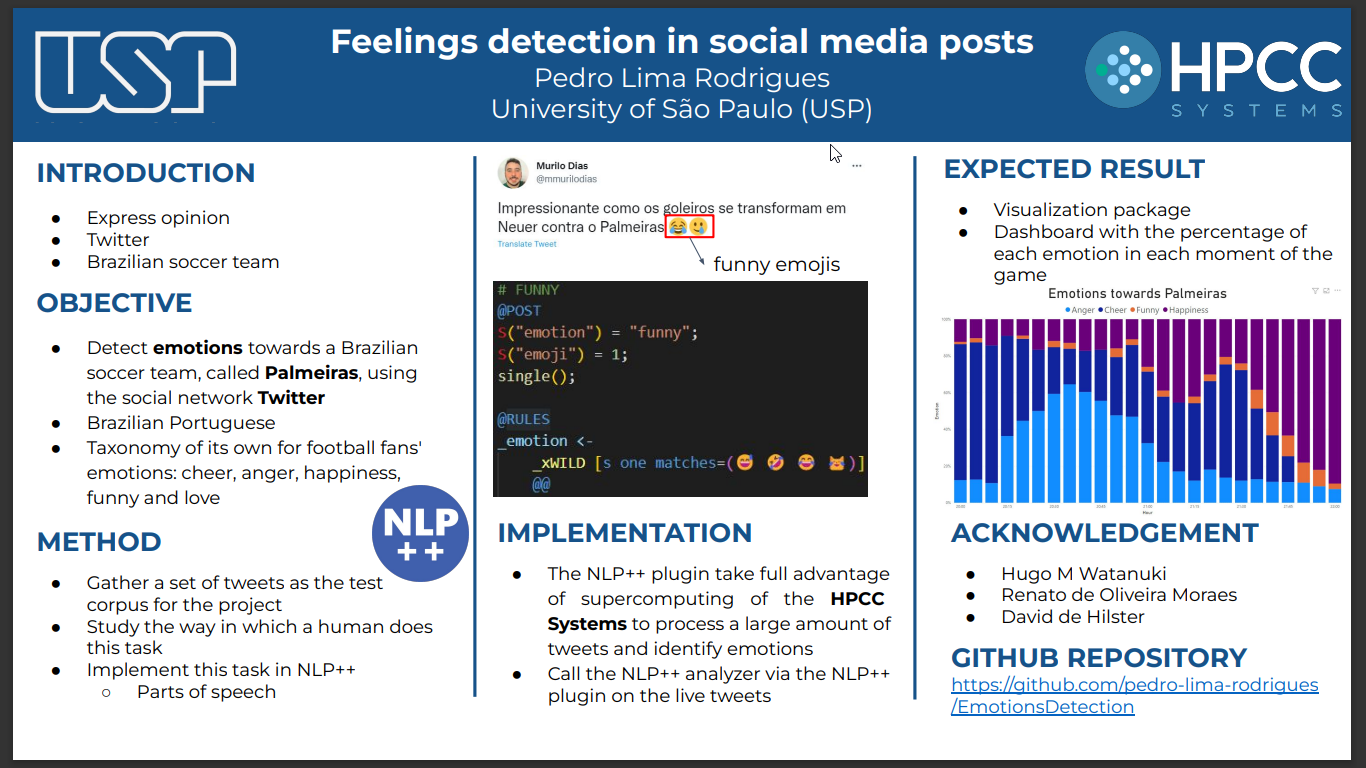